Straight Ahead Pose to Pose

A necessary principle of animation, but my least favourite to explain. Straight ahead is frame after frame being drawn, no gaps so outcome ideally is more fluid. In 2D, straight ahead can distort the proportions of the character whereas with pose to pose the animator is missing frames for example they may draw the 1st, 6th and 12th frame and fill in the gaps. Pose to pose allows less distortion of proportions as the animator can see where they are aiming to get to. Combing the two allows the animator the best of both.
Posted by Felicity Moira Sim at 01:06 No comments:

Appeal can be compared to what be charisma of a real life actor. People often narrow appeal into the category of cute characters, their appeal of the viewer wanted to cuddle them, but monsters and such can have appeal too. The main concept is that they are believable, real and interesting. Appeal relies on the features of the character, the design. If you wanted the characters appeal to be cute the design could have baby- like features and symmetrical face. An animator would not design a cute character with small, unsymmetrical eyes or a sharp long nose as the appeal for the character type would not be believable.
Appeal lends itself with design. A character can have the desired appeal as long as the design is right.

This example is perfect for showing appeal with the design of the witch and Snow White. They are excellent contrast to show both negative and positive appeal.
Posted by Felicity Moira Sim at 00:45 No comments:

http://www.youtube.com/watch?v=tjlssqHQJ6o
Posted by Felicity Moira Sim at 00:25 No comments:

A still example from Warner Bros. The use of exaggeration here is obvious in the facial features. 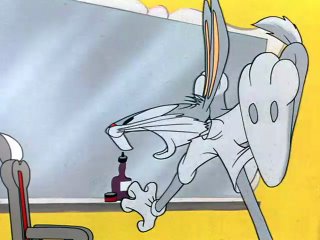 Posted by Felicity Moira Sim at 00:09 No comments:

Exaggeration does not just mean distorting the actions or objects, but the animator must carefully choose which properties to exaggerate. If only one thing is exaggerated then it may stand out too much. If everything is exaggerated then the entire scene may appear too unrealistic, the balance must be right.
Exaggeration is used in animation when trying to decide whether to be realistic or not by playing with the levels of exaggeration used an animator can achieve this. Exaggeration can be used on the character or elements in the storyline itself.

The scene in the Lion King has the correct amount of exaggeration. When finding an example for this principle I tended to focus on the features of the characters, the eyes in particular.
Posted by Felicity Moira Sim at 00:05 No comments:

Conclusions - Timing, Slow In and Slow Out & Arcs

Timing is the very base of animation, giving an object variations of force (speed, weight etc). Everything we see on TV or in the cinema is set to the pace of the human brain, hence why we see 12fps as flowing movement. The gaps between key positions influence the importance of the movement.

Timing in Disney’s Fantasia is crucial to the whole feature, as it is all timed perfectly to an orchestra. In this piece (03:40) the animators have first marked on screen each key position (as beads of light) and then used the gap between beats to reveal the ‘timeline’ using trailing lines. This is the simplest form of combining timing and motion to show the inner mechanics of fundamental animation


Slow In and Slow Out
Sometimes a movement can be so fast that it almost doesn’t register with the viewer. By steadily building up to the climax, precognition within the audience can help guess the next action, while a gentle decline afterwards verifies the action through reaction.

Wiley Coyote is well known for running off cliffs, but by watching carefully you will notice that the actual decent out of shot is only a few frames long. Running on thin air gives us a big clue as to what happens next, and the next shot looking down the cliff face reveals his gradual plummet to the ground. Slow build up, fast action and slow reaction.

Arcs
In essence, arcs are the connecting joints to a base pivoting joint (e.g. fingers through to shoulder). They can be used on any movement made by a flexible substance. Hair is a common example, as its small width allows for optimum curvature, but again, this can be applied to a spine, tail or even plants and trees blowing in the wind. If nothing else, arcs represent the flow of a force pushing/pulling into and around an object.
Feet of Song is a wonderful way of viewing our bodies, and their potential energy becoming kinetic throughout. At some point the joints become invisible, almost as a metaphor for the driving force (e.g. arms) pushing through the air and falling with gravity. This pendulum movement is what creates drag and adds realism to an animation.
Posted by Anonymous at 18:36 No comments:

Conclusions: cycles, staging, straight ahead and pose to pose

Historically cycles were one of the early forms of animation through a device called the zoetrope where a spinning cylinder gave the impression that still drawings were in fact moving, of course the drawings then had to tell a repetitive story due to the nature of the zoetrope.

Cycles in animation today have their uses for such things as walk and run cycles, and many other actions to do with movement. However it is popular to also create cycles that are morphs, possibly due to the limitations a cycles narrative presents, a morph can overcome these issues.

How a scene is staged is very important to the overall story and how the audience perceives characters and the plot. A scene may have a lot going on in and around it but it is important for the animator to choose what to focus on as that is what the audience is going to see and perceive. It can cause elements of surprise to the storyline as the camera can focus on one thing, yet cut to another unexpected. It is important to consider what is included in the scene and how this can affect the audience emotion, for example shadows usually cast suspense and lightning can portray fear or horror.

Staging is usually not true to reality as the animator has to stage the characters at angles they would not be in; for example to converse they would probably be set at 3/4 angles to each other but this is so the audience can read emotion and expression.


Straight Ahead and Pose to Pose:

Straight ahead animation is usually spontaneous and fresh as the lack of control can help keep the whole process of drawing one frame straight after the other very creative as new ideas can be added as the animator goes along. However it is hard to judge the timing of the piece because of the lack of control, and in scenes where the layout or the background is busy, the technique will not work as it is hard to match the detail.

Pose to pose animation is carefully planned out, drawing key frames first and relating them to each other in size and action, the inbetweens are then filled in afterward. Scenes are always easy to follow because of the careful consideration, timings can be planned perfectly in the sense that the pattern of movement consists of short sharp movements as well as smooth flowing ones. However this of course takes time and resources, the downfall compared to straight ahead animation being that if a better idea is considered, it cannot be added as the scene has already been planned out.

Combining the two processes together is a winning combination, the pose to pose technique stops the straight ahead action from getting out of hand whilst keeping spontaneous. The use of all the other principles is very important to pose to pose action, such as timing and secondary action as it was these that developed the technique. Historically before the principles were developed, animators used to draw only in the straight ahead method and were only concerned with entertaining actions and the visuals.
Posted by Rebecca Pople at 15:44 No comments:

This blog has been set up by four first year students studying Animation at Bristol UWE.
We are exploring the '12 principles of animation' to better our understanding of the practical processes we undertake, in the hope that we aren't just "moving stuff about".